The DRF Luftrettung successfully hosted the 2nd HHO Symposium from 7th – 8th September 2022 at the Operation Centre at Karlsruhe/Baden-Baden Airport. The symposium´s main topic was crew coordination in Helicopter Hoist Operation. The objective of the event was further to establish an expert platform for Helicopter Hoist Operators in Europe to increase safety, quality standards, and innovation. The HHO Symposium brought together international helicopter hoist operator professionals, instructors, pilots, and maintenance technicians.

Axnes develops high-quality wireless crew intercoms and has experience with systems used in helicopters since 1995. Being present at HHO gave us a unique possibility to meet with existing and potential customers of wireless intercom systems to better understand the operational challenges and needs necessary to increase safe crew coordination. The Axnes PNG system extends the communication by also including the rescue operator at the end of the hoist in the communication loop, providing communication with the other crew members, also in harsh and noisy environments. One of the central topics during the Symposium was handling of stress during rescue operations. Providing clear wireless Axnes communication to the rescue operator is certainly a stress reducing factor in challenging environments and missions. Roy Smit and Per Eirik Heimdal really appreciated the great feedback we received from experienced users during the Symposium, which motivates us to continuously improve our products in close dialogue with our customers. Many of them reported that the use of our system represents a game changer in crew coordination.

Communication is vitaly important for any type of mission or operation you are conducting. The Axnes PNG system does more than just providing crystal clear audio for the crew member that is down on the hook of the hoist. The system also allows the rescuer to be tracked on a moving map system, meaning the crew on board of the helicopter can now know exactly where the rescuer is on the ground, making it easier to pick him up again. This feature also allows search lights and camera systems to track the rescuer automatically, as a dynamic target. The handheld units of the PNG system that the rescuer is wearing also gives the possibility to utilize the PTT2 button to directly communicate on on-board radio systems, so if the rescuer needs more medical advice, they can immediatly talk with doctors that are remotely stationed at a totally different area. It also goes the other way around, so the rescuer can inform the hospital of the case they have at hand, making it possible for the hospital to make necessary preparations for when the patient is flown in. The PNG MP50 handheld can also change to the maritime VHF channel, making it possible for the rescuer that is being hoisted on a deck of ship to immediately establish communication with the captain, who in turn can guide the rescuer to the patient or emergency on board of the ship. All these features in a single system and one handheld transceiver, allows for greatly improved crew coordination and strongly enhances safety during hoist operations. The PNG system has led to quite a number of rescues worldwide that could not have been executed if the rescuer wouldn't have had the ability to talk directly on the aircraft intercom. Hand signals are always available for the rescuer and they should be considered as the basic means of communication, but it is in situations where hand signals can not be used anymore (when hoisting in dense foilage for example) that the PNG system can make a difference. A hoist operation would normally be stopped whenever the hoist operator or anyone of the crew deems the situation unsafe. The PNG gives the entire crew an extra set of eyes down on the hook which, in turn, can make normally impossible hoisting operations suddently possible.

A life cable cut was conducted during the HHO Symposium as well and again the PNG system can play a vital role in this type of manouvre. By having communication available, the rescuer can help timing the cable cut, to increase the chance of less injuries sustained. It can also help in the opposite direction, by being part of the intercommunication of the crew on board the rescuer can give a heads up from the ground to the crew on board of the helicopter, whenever he spots a potential cable hazard. It is often easier to see a cable from the ground, standing still than from the flying aircraft. That way, the rescuer can inform the pilots and hoist operator in time.

We are looking forward to next year! 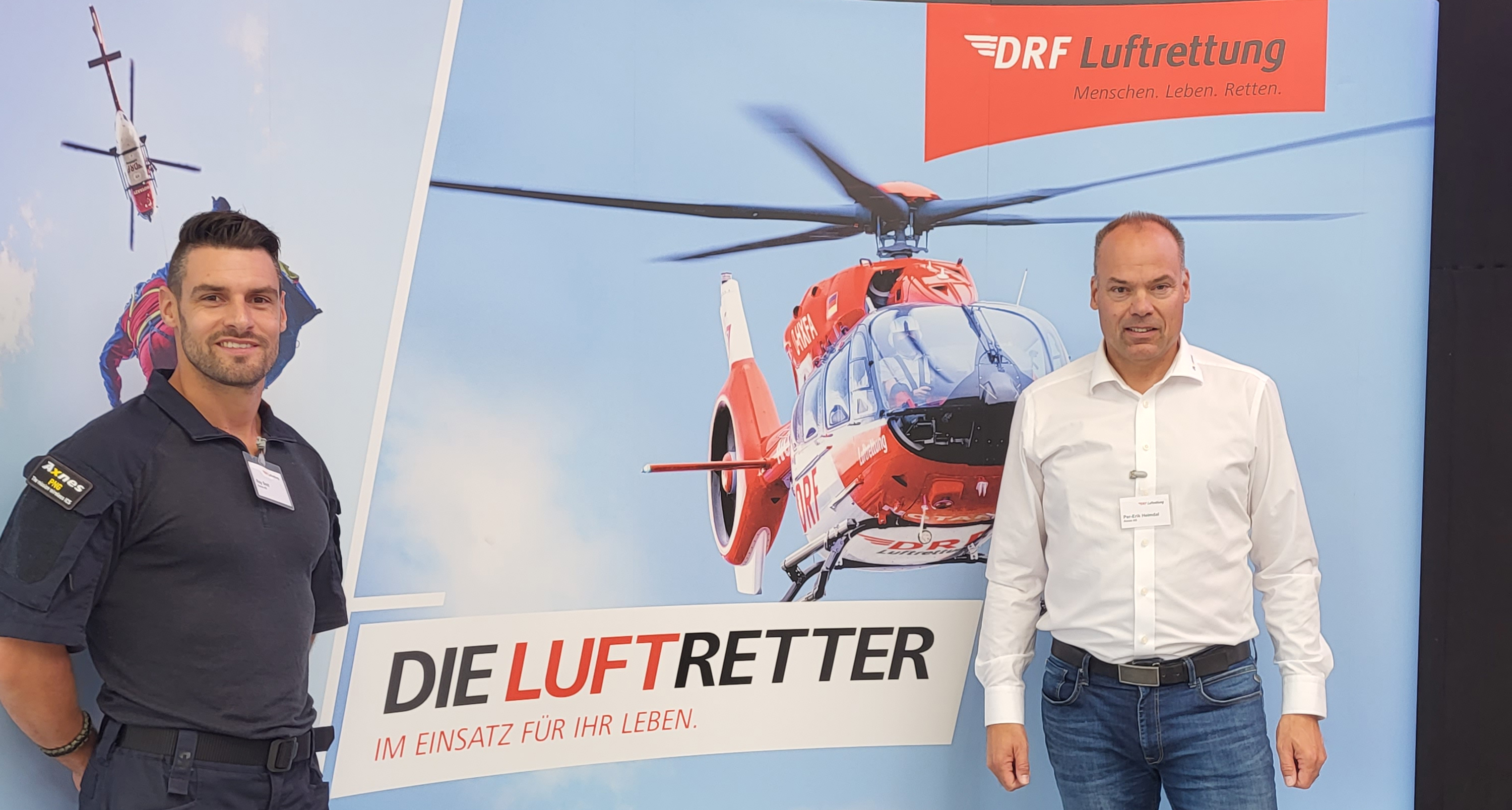